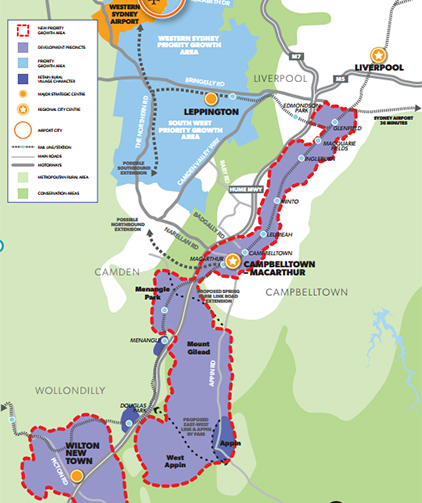 A new growth area will be created at Wilton supported by schools, roads, new services, land for jobs and open space and even an 11 hectare recreational lake with the first homes appearing as soon as 2018.

Planning Minister Rob Stokes today announced plans have been made for a new self-contained community at Wilton New Town with its own town centre. The community will have around 16,000 homes over the next 30 years. The new land release areas, which will accommodate around 35,000 home sites will now include room for future expansion after 2036 as demand requires it. Mr Stokes said that detailed plans for these new towns at Menangle Park and Mt Gilead would be released for community consultation in coming months.

“We are determined to boost supply by releasing new land for homes and making people’s lives easier by creating opportunities for jobs close to these homes and that’s what we’re doing here in the Wollondilly and Macarthur district,” Mr Stokes said. “Campbelltown is the epicentre of all this activity, cementing its place as south west Sydney’s regional city.”

Member for Wollondilly Jai Rowell welcomed the boost to the region that will come with the announcement of Wilton New Town. “This is something I have been working on for seven years and the project will see much needed infrastructure in our area such as school and employment lands,” Mr Rowell said.

Mr Stokes said the announcement is the culmination of a partnership between the NSW Government, Campbelltown and Wollondilly Councils and the local business community.

“I’m proud of what we’ve achieved together,” Mr Stokes said.